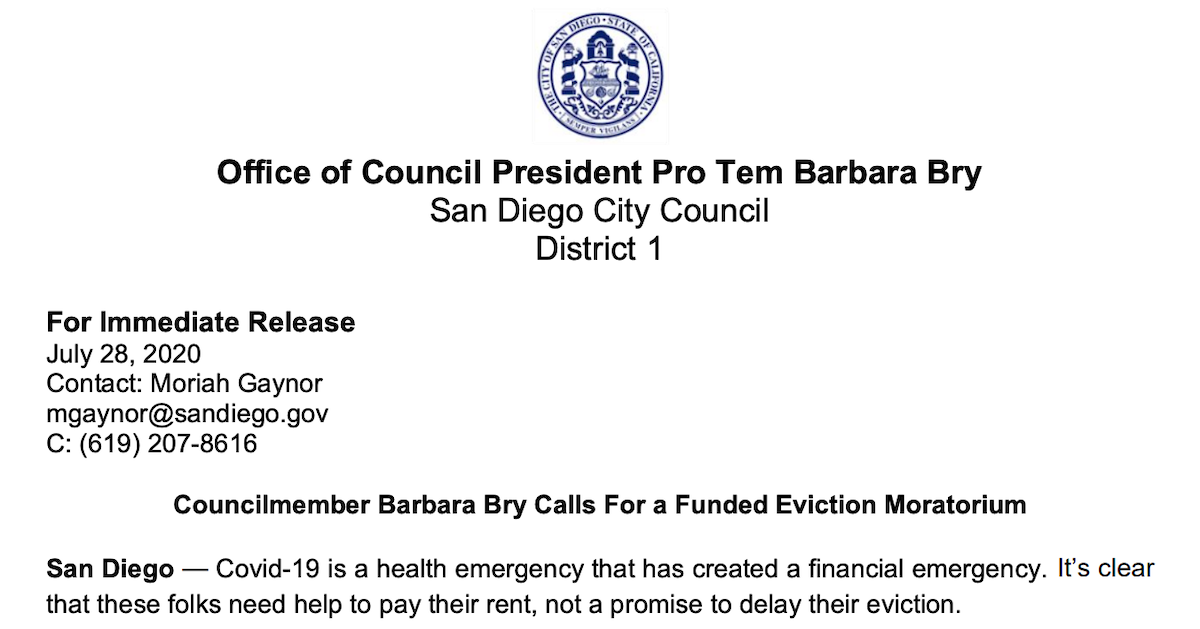 My Statement on the Extended Eviction Moratorium

San Diego — Covid-19 is a health emergency that has created a financial emergency. It’s clear that these folks need help to pay their rent, not a promise to delay their eviction.

Before we vote on this measure, I urge my colleagues to carefully read the Governor’s Executive Orders on evictions, the language of the Federal moratoriums and the Emergency Rules adopted by the State Judicial Council.

The Judicial action is unambiguous. The court will not enforce any eviction proceedings until 90 days after the State of Emergency is lifted in California. So, let’s be clear. Regardless of how we vote today, no one is getting evicted.

So, what is really at stake?

First, the City has no way of protecting residents when their credit is ruined and they are facing judgements for deferred rental obligations. Renters who choose not to pay and do not understand this will suffer ruined credit and profound difficulties finding new housing or making any credit-based purchase. The City has no power to fix this, but failing to properly communicate this fact to renters will likely subject City taxpayers to liability in subsequent tenant rights legal actions.

Second, City resources are so limited that the City is conducting a lottery to distribute limited funds. You can be certain that tenant rights lawyers will cite this fact as evidence of the City’s “arbitrary and capricious” behavior when they sue the City for the funds necessary to prevent eviction.

If you have any doubt about the potential jeopardy of an unfunded eviction moratorium, you need look no further than the careful actions of the Governor.

You may have read in the press that the Governor extended a “statewide eviction order” in July. But that is not actually true. Instead, he allowed the State’s eviction moratorium to expire, and instead extended Executive Order N-28-20.

Executive Order N-28-20 simply removes barriers in state law that would otherwise prevent local governments from initiating their own moratoriums. Allowing the state moratorium to expire and leaving this initiative to local governments, the Governor protected state taxpayers and left in the hands of local officials to assume the liability for funding their own moratoriums. The city of San Diego does not have the resources to provide meaningful rent relief to the thousands of renters who need it.

This is why I supported the City’s moratorium when it aligned with the County and anticipated state action, and I opposed the action to extend beyond the Governor’s Statewide Moratorium contained in his second Executive Order.

Any unfunded eviction moratorium is vulnerable to legal challenge by both tenants and landlords. And, any moratorium that funds some renters without funding others is the very definition of arbitrary and capricious.

The State (through Judicial Council Emergency Rules) has already fashioned a state-wide protection, which accounts for exceptions when necessary to protect the public health and safety. The Judicial Rules protect renters from eviction.

This proposal is a cruel hoax for San Diego renters. The only effect of this proposal is to encourage renters to unknowingly damage their own credit and subject City taxpayers to liability for both back rent and damages associated with their bad credit reports. Next March, these renters will be left with thousands of dollars in unpaid rent, their credit ratings will be destroyed, and they will still be evicted.

What renters need is funding. Funding that only the federal or state government can provide. I urge my colleagues to join me challenging the state Legislature to support a funded eviction moratorium.

The Legislature has both the power and financial capacity to enact a funded eviction moratorium. The Judicial Council acted specifically to give the Legislature time to act. The Legislature is back in session. They should act immediately to impose a funded statewide Moratorium.

It’s past time for the state Legislature to step forward, provide meaningful rent relief so renters can exit the moratorium without their finances being destroyed, and avoid foreclosures for hundreds of landlords.

I would like to amend the motion that this ordinance be conditioned on identifying funding for all renters.