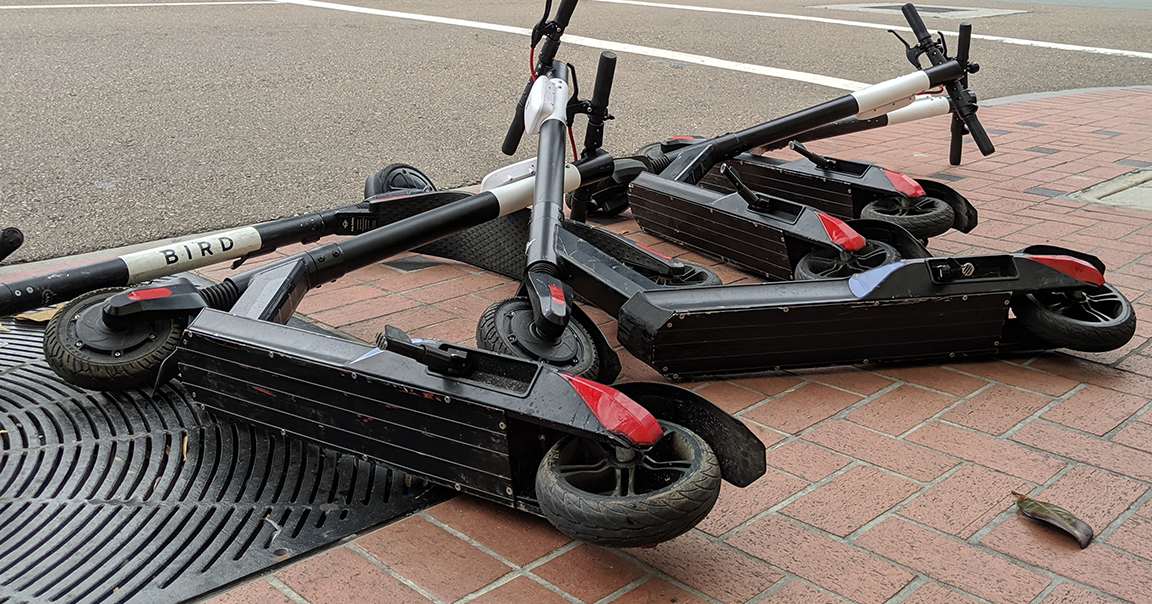 Opinion: Why a scooter ban is needed to keep San Diego safe

On July 26, I called for a temporary ban on electric scooter rentals in the city of San Diego until we adopt a sensible plan that protects San Diegans and ensures public and environmental safety.

I understand that the city faces many important issues including homelessness, housing affordability and meeting our climate action plan goals. Scooters are one more example of the city’s failure to respond proactively with thought-out, comprehensive solutions when we face a new challenge.

In May, the City Council approved a scooter permitting and regulatory program that went into effect on July 1. We believed these rules could help reestablish order on our sidewalks and streets.

Instead, the problem worsened.

In addition, several thousand scooters collected from private property are piling up in a privately owned scooter graveyard, which poses a long-term environmental hazard for our city.

Some neighborhoods see the scooter debris littering their streets.

The companies do pay fines, but it’s unclear if we are recovering our costs. Furthermore, we are using our understaffed police force and our overworked life guards for enforcement.

Our police officers need to be focused on community policing, and our life guards should be protecting beach goers who are in the water, not looking at scooter riders on the boardwalks and tending to their injuries.

A moratorium is the answer.

Let’s look at the history.

When the scooters began appearing on our city streets in February 2018, I urged the mayor to declare a moratorium and issue a Request for Proposals, similar to what San Francisco and Santa Monica had done.

No need to reinvent the wheel.

While San Diego was asleep at the handle bars, these cities developed criteria, selected a few operators, and limited the number of scooters that could operate.

Last year, I also supported a summertime ban on the beach boardwalks, but was unable to convince a majority of my Council colleagues to support the measure.

As a businesswoman before being elected to the City Council, I understand the behavior of these companies. Raise hundreds of millions of dollars, deploy your product in a city which charges you little or nothing to use their infrastructure, and fight for market share. Grow your business and experiment on consumers while government is slow to respond.

On the day that I called for the moratorium, I drove down Mission Boulevard, and in one mile I counted hundreds of scooters — some parked legally in corrals, others strewn all over the sidewalks and grass.

At the boardwalk, I saw people riding tandem (often a parent and a child), talking on their cell phones, and darting in and out among pedestrians, bike riders and skate boarders.

No one was wearing a helmet.

Because of state legislation supported by Assembly member Todd Gloria, cities are prohibited from requiring helmet usage for people over the age of 18. Mr. Gloria will argue that this puts scooters in sync with bicycles. But scooters are flimsy electric vehicles, not bicycles.

A two-month study in Austin, Texas, found that among the injured riders, more than 40% — 80 of 190 — sustained a severe injury, which included bone fractures, nerve, tendon or ligament injuries, severe bleeding or sustained organ damage. Fewer than 1% wore a helmet.

It’s past time to impose a moratorium and issue a request for proposals.

The criteria for requests should include a cap on the number of operators and scooters (since July 1, we have data on the actual number of scooter riders and where people go), fees (which can be invested in infrastructure and enforcement), data sharing (so we know how many scooters are operating and where they were going), education and equity to ensure that neighborhoods that can benefit the most are appropriately served.

We should also have the right to issue fines to both the companies and users for unsafe behavior and parking tickets for not leaving the scooters in designated locations.

After San Francisco selected two operators and placed a fleet cap on the number of scooters allowed, the number of complaints dropped dramatically.

We can create a program that offers reliable and safe scooter service and is respectful to everyone in our community.

All we need is the right leadership.

Bry represents District 1 on the San Diego City Council. She is a candidate for San Diego mayor.