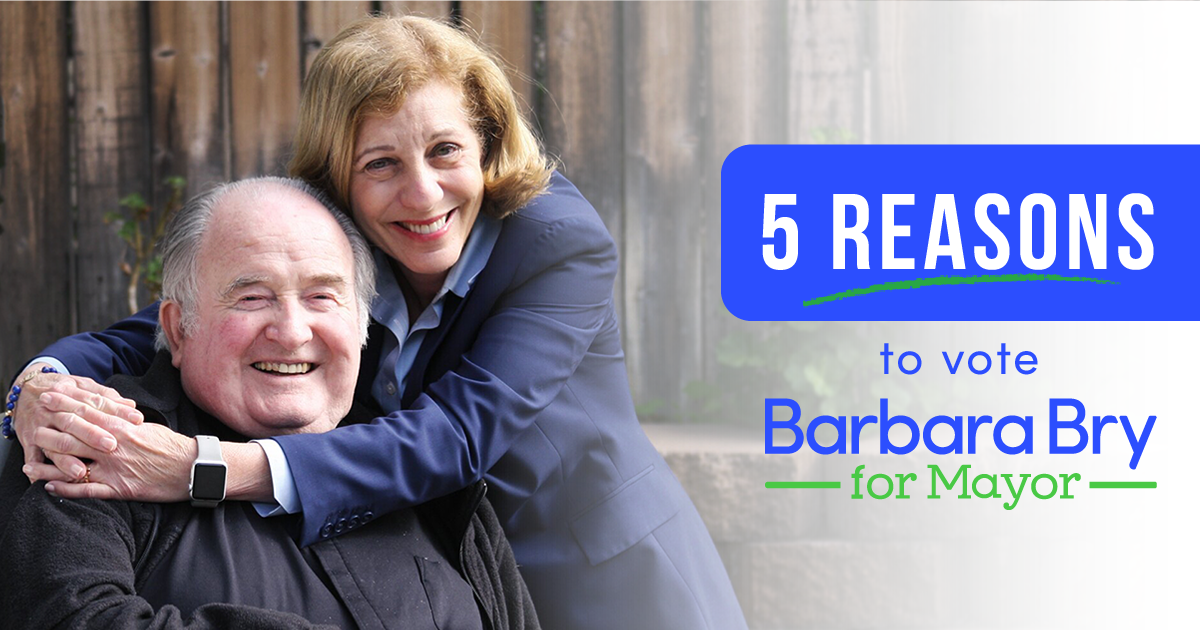 5 reasons why Barbara Bry should be our next Mayor

After being elected to the City Council in 2016, it didn’t take long for Barbara to realize City administration lacked the leadership and management skills to deliver the services and facilities residents deserve.

“I’m not a politician. I had never run for office. Like my neighbors, I saw things in my neighborhood deteriorate despite a growing economy. It made no sense. I’ve had the good fortune to be successful in business. My kids are grown. I thought it was time I offer my background and experience to fix what’s wrong at City Hall.”

Barbara is supported by community leaders, not the partisan political establishment. That’s one big reason she is the only candidate who has the independence to clean up City Hall and protect our neighborhoods.

As a Councilmember, she got a closer look at City Hall. What she found was a disturbing culture of insider-influence, political gamesmanship and short-term fixes, with little attention to long-term plans based on data, best practices or the public interest.

The City was failing to competently perform even the most basic services such as road repair, water meter reading or managing its real estate assets, and it was failing to respond to emerging problems like homelessness, motorized scooters, a lack of affordable housing and the impacts of short-term vacation rentals.

“I made the decision to run for Mayor not to pursue a career in politics – I’ve already had one of those in business – but out of a realization that the City is in desperate need of competent leadership and management experience. In fact, the last thing this city needs right now is another ‘political’ leader.”

Barbara believes that our City’s strength derives from our diverse neighborhoods.  She supports investments in infrastructure and planning to enhance the quality of life in every neighborhood.

She also believes that every San Diegan deserves a chance for a quality education and good-paying job.  Her experience as a high-tech entrepreneur equips her to create an environment that will continue to grow high-quality job-producing companies and a skilled workforce to support them.

In 2012, while he represented downtown San Diego on the City Council, Todd Gloria promised he would "end homelessness Downtown in the next four years."

Yet, homelessness more than doubled under his watch.

That’s because homelessness is not simply a housing problem. It’s also a mental health problem and a substance abuse problem and an income disparity problem.  Simply placing troubled folks in a home, or a tent, does not solve their problems.

Barbara will take a comprehensive approach to treating the homelessness problem.

Barbara Bry has taken start-up companies like ProFlowers.com from an idea to multi-million-dollar operations. And she’s helped build successful non-profits like Athena, and Run Women Run, which have empowered hundreds of women and youth to be impactful leaders in our community.

Barbara is supported by neighborhood residents and community leaders, not the partisan political establishment. That’s one big reason she is the only candidate who has the experience to clean up City Hall and demand accountability for taxpayers.

Yet Barbara’s opponent joined our current Mayor to support Sacramento legislation that would have permitted Wall Street financiers to build multi-story apartments with no parking requirements in single-family neighborhoods.

Responding to industry lobbyists, he also co-authored legislation in Sacramento that stripped San Diego of its right to impose reasonable safety regulations on motorized scooters.

LEARN MORE: Barbara in the Neighborhood

4. Barbara Bry will clean up the mess at 101 Ash Street

As a taxpayer, you should be furious.

City leaders – including Barbara’s opponent, did inadequate due diligence when they decided to spend more than $120 million of YOUR hard-earned tax dollars to purchase the still-vacant and asbestos-contaminated 101 Ash Street building.

Why were they willing to pay a $60 million premium to conceal the identities of those owners? Who stood to benefit from this gross misuse of city funds?

Barbara has asked the City Attorney and the Mayor's office for full disclosure of the facts so we can finally get to the bottom of this and get taxpayers off the hook for this white elephant.

“I will continue to demand transparency and honesty. Once the cover-ups have been exposed and we know definitively what the City spends and where it spends it, I’m prepared to make the tough and even unpopular decisions required to serve our citizens, become an employer of choice, and restore financial stability and accountability.” - Barbara Bry

As a City Councilmember, Todd Gloria presided over a period of neglect, wheel spinning and high-profile embarrassments that have left Balboa Park in serious need of attention.

In Barbara's short time on the Council, she witnessed the pattern of political gamesmanship that substitutes for leadership at City Hall. Balboa Park, like so much else at the City, is in need of solid, non-political management.

Barbara believes that Balboa Park is critical to our identity as a city. Neglect is not an option.

Protecting the future of Balboa Park requires engagement and cooperation by all stakeholders, and we need leaders who can assist stakeholders in developing long-range plans. - Barbara Bry

Still not sure? Here’s Why I’m Running, My Issues, and a Quick Candidate Comparison.