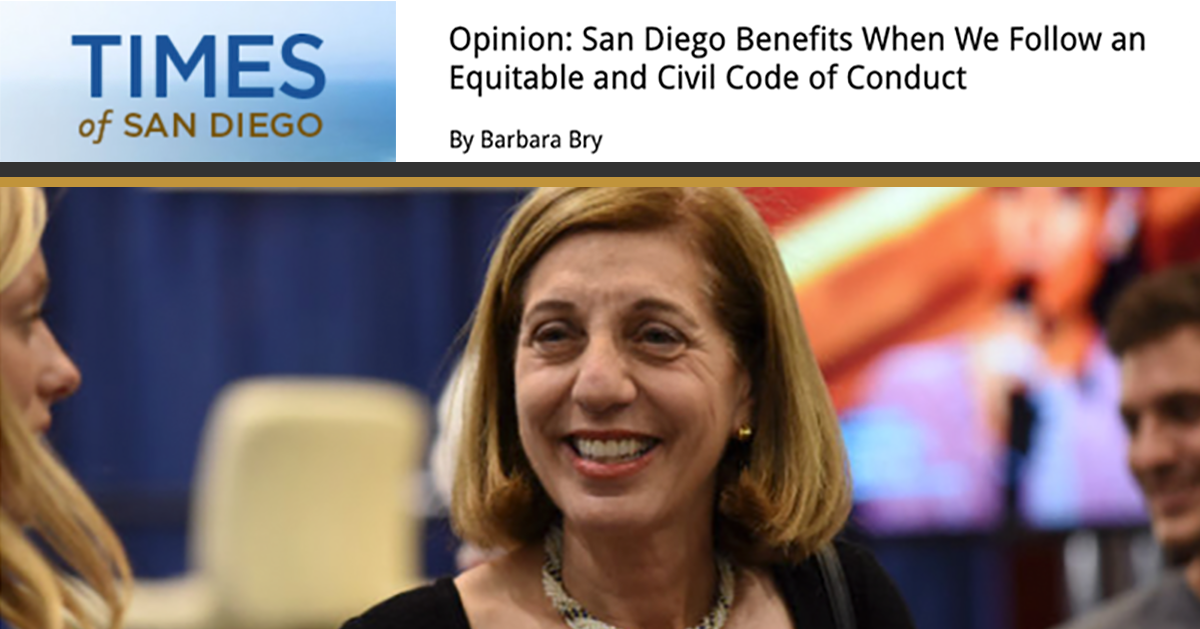 Opinion: San Diego Benefits When We Follow an Equitable and Civil Code of Conduct

I spent most of my early career as either the only woman in the room or one of a few women.

In 1989, I was the associate director of UCSD CONNECT, which had been established four years earlier to help high-tech and biotech entrepreneurs start companies. As I noticed more women coming to our programs, I decided that we should get together in a more formal way in order to help each other in both our personal and professional lives.

The result was what is now called Athena San Diego, named after the Greek Goddess of Wisdom and War, two attributes I thought were important to success in the male dominated world of tech and biotech.

As the #MeToo movement unfolded, I remembered my own experiences...

Particularly when as a young journalist, a senior government official would call me at home at night wanting to come over. I never told anyone—not my girlfriends, not my employer and not this individual’s boss. It made me think about what could be done in San Diego.

When I encounter a problem, my solution is to convene a group to help develop a solution. I invited leaders from Athena San Diego and Run Women Run—both organizations that I had started—and Lawyers Club of San Diego (the women’s bar association). As we sat around the table, one of the women said, “Barbara, it’s not just about sexual harassment. It’s also about pay inequity.”

We started out by hosting three workshops with participants who represented our diverse economy. We learned a lot from the brave women and men who candidly shared their personal experiences about sexual and gender harassment and pay equity.

Yes, sexual harassment and equity laws exist already, but as we’ve seen or personally experienced, they don’t necessarily work. Our vision was to create a cultural change in our region, where all businesses and organizations can commit to having an equitable workplace. The result is the Workplace Equity & Civility Code of Conduct.

The reasons to sign the Code of Conduct are both moral and economic. Employers will have happier, more productive workers, which is an important recruitment and retention tool at a time of low unemployment.

It’s also the right thing to do.

This initiative is a powerful public-private partnership unifying small and large businesses, nonprofits, government, and labor organizations to address harassment and pay inequity in the workplace.

I have signed the code, and I am encouraging all San Diego employers to do the same.

Barbara Bry currently serves as President Pro Tem and represents District 1 on the San Diego City Council.  She is also a candidate for Mayor.

OPINION: SAN DIEGO BENEFITS WHEN WE FOLLOW AN EQUITABLE AND CIVIL CODE OF CONDUCT was last modified: October 30th, 2019 by Editor