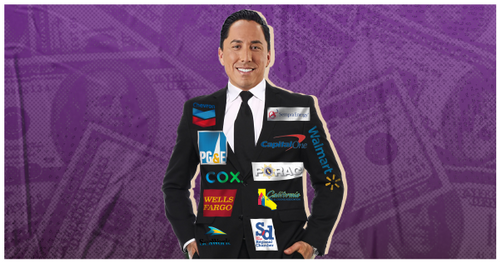 The Municipal Employees Association, headed by the cheerleader for the 101 Ash Street scandal, has just put in an unprecedented $250,000 into a dark money PAC to support Todd Gloria and attack my candidacy.

Another $50,000 was contributed by  a retired city employee receiving a lifetime $240,000 per year pension. Another $200,000 came from the San Diego Chamber of Commerce, even though the California Chamber of Commerce ranks Todd Gloria DEAD LAST on their own rankings list.

Another $40,000 came from the short-term vacation rental industry, while our municipal code goes unenforced.

Another $75,000 came from a statewide PAC funded by corporations including Walmart, Wells Fargo, Chevron, PG&E, insurance companies, and big pharma.

Let’s get serious: What do they really want?

They could care less about the future of our city.  They just want a mayor who will protect their interests.  And in Todd Gloria, that’s exactly what they’ve got.

‍I need your vote to help me clean up this mess at City Hall, and I need your financial support to help us fight back.