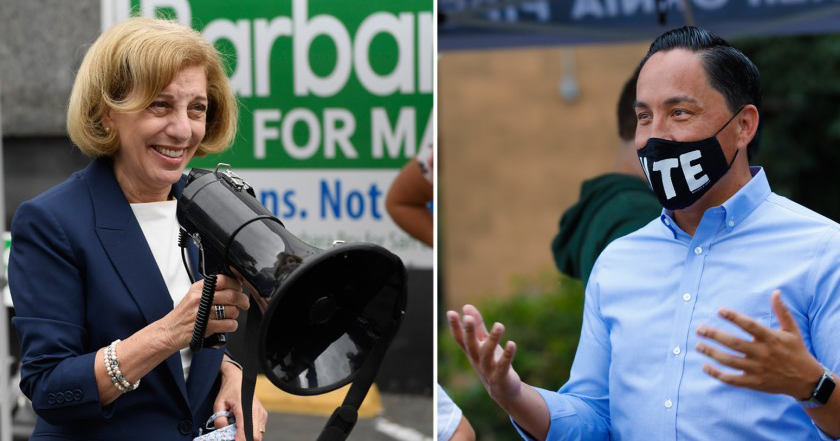 IN THE NEWS: Gloria, Bry campaign across the city Saturday as battle for San Diego mayor enters final stretch

SAN DIEGO — Two Democrats in a fierce battle to become San Diego’s next mayor spent Saturday bouncing between campaign events, which included rallies, a horn-honking caravan of vehicles and volunteers delivering fliers across the city.

Councilwoman Barbara Bry led a caravan of nearly 50 cars decorated with her campaign signs and pro-Bry slogans through parts of downtown San Diego and some surrounding neighborhoods.

Assemblyman Todd Gloria handed out campaign literature and yard signs in Mission Valley to more than 100 local labor union members, who then spread across the city to deliver the literature directly to homes – and voters.

With just 10 days left until the Nov. 3 election, both candidates have prioritized finding new supporters and urging them to vote in the hotly contested mayoral runoff. They’ve also both been flooding local TV sets with campaign ads.

Two recent Union-Tribune/10 News polls, one in early September and one in early October, showed the race to be nearly a dead heat.

In the October poll, 23 percent of voters described themselves as undecided. The TV ads and the campaign events on Saturday aim to help sway some of those undecided voters.

Across town, Bry gave a campaign speech to a group of nearly 50 supporters, many of whom had decorated their cars in preparation for the caravan.

“I’m still standing today in an election that I was never supposed to have a chance in — because of you,” Bry said. “We have built a grassroots, volunteer-driven effort in every neighborhood. And when we win, we’re going to take back City Hall from the special interests.”

Residents and volunteers from neighborhoods throughout the city adorned their cars with green-and-blue signs saying “Barbara Bry for Mayor: Solutions. Not Empty Promises.”

As the group of more than 30 cars left the downtown parking lot, they were joined by a couple on a motorcycle holding up green-and-blue signs supporting Bry.

Supporters of Bry praised the candidate during her campaign event.

Logan Heights resident Martha Zapata said she’s voting for Bry because she has a fresh outlook and is connected to all of San Diego’s diverse communities, including those south of Interstate 8.

“Our communities in the south are very diverse and very entrepreneurial, they’re extremely entrepreneurial, hard-working people, but don’t have the right financial support and access to micro loans,” Zapata said.

Bay Ho resident and campaign volunteer David Curtis said he first learned of Bry when she was gathering signatures to enter the primary. He said he was impressed that she was willing to speak with him about his vision for the city for 30 minutes before asking for his support.

“That was pretty tremendous to me because she was just after one signature, but she was willing to talk to me for that long,” he said.

During her rally, Bry pointed to the diverse experiences of her life as being the preparation needed to lead the city. She focused particularly on her 30 years in the world of tech and biotech, contending that more jobs in those high-paying fields are key to San Diego’s future.