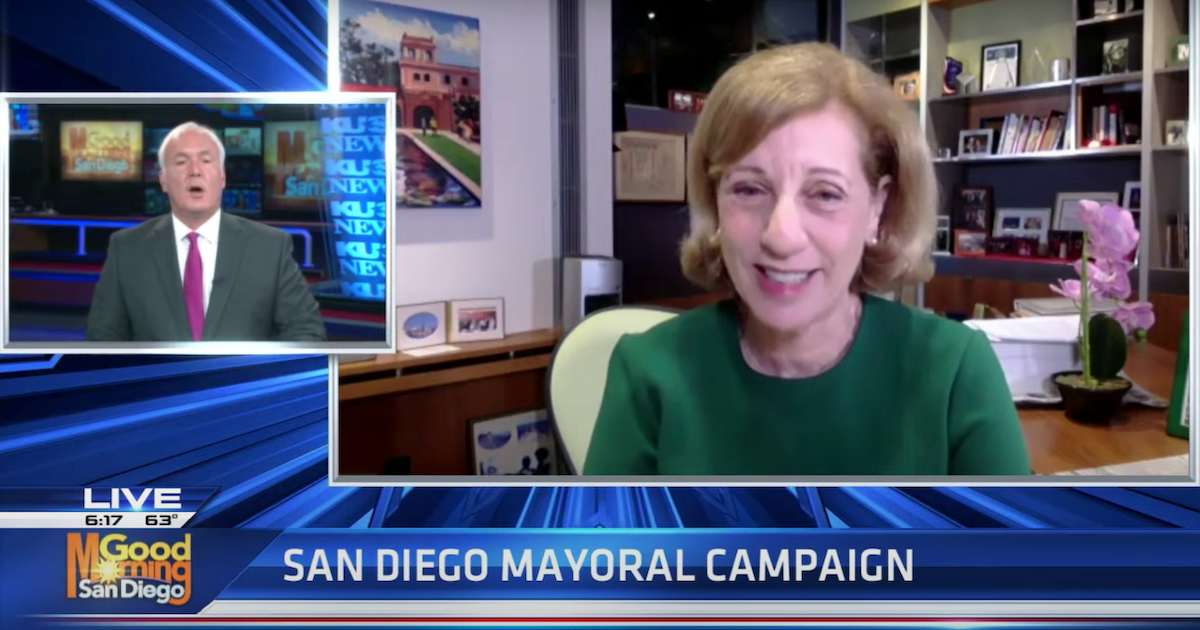 Council President Pro Tem, Barbara Bry, highlighted the issues she and her opponent, Todd Gloria, disagree on, even though both candidates are Democrats.

How do you differentiate yourself from Mr. Gloria?

Our life experiences are very a different. I was a businesswoman for 30 years in the technology world before I ran for City Council in 2016. I've had a very diverse life. In addition to business, I started to organizations that empower women. I have served on many nonprofit boards. I'm a mom. I'm a grandma. I'm a wife. I believe the diversity of my life experiences has prepared me to be our City's next mayor.

In contrast, my opponent (Mr. Gloria) has only worked in government – either for government or as an elected official. So our tax dollars have always paid his salary. Second we're very different on how we view land use. He wants to eliminate single-family zoning. I believe that will simply lead to gentrification. He has voted for legislation that would allow up to eight homes on a single-family lot.

Bry slammed Gloria for his work co-authoring the “gig-worker” bill, AB 5. AB 5 forces companies to reclassify independent contractors as employees. Something many companies simply just cannot afford, and something most workers do not even want.

KUSI interviewed dozens of independent contractors who lost their jobs as a result of the legislation Todd Gloria co-authored, and still supports. We could not find one person willing to speak on camera who received a full-time job as a result of AB 5.

AB 5 has caused thousands of Californians to lose their ability to make an income, something the bill’s author flat out denied on KUSI News.

What is your position on AB5?

On AB5 we differ. He (Mr. Gloria) co-sponsored (AB5) with Assemblymember Gonzalez Fletcher. I am calling for the repeal of AB5 and I support Proposition 22, which would create the third category of worker. Our new economy requires a new category of worker that DOES get benefits and protections. This is what Proposition 22 on the November ballot will do.

At first Bry was a supporter of AB 5, but now wants the legislation repealed. She says she switched because she heard from business owners, and workers how harmful it was.

When AB5 initially came out, you were on Mr. Gloria's side. Why did your position on AB5 change?

I listened to the world around me. As AB5 began to be implemented, I heard from small business owners, artist, journalist, interpreters, and many kinds of people were losing work because of AB5. That's what you want any elected official to do – to listen to the world around them, to take in new information, and then to make a responsible decision.

Do you feel responsible for what we're now dealing with at 101 Ash Street?

Remember, Mr.Gloria bought the building in 2016, before I joined the council. It was a rushed deal, for many reasons, to disguise the true owners of the building. It was done as a complicated lease purchase, which cost the taxpayers an extra $16 Million dollars – something my opponent was very much aware of... anybody can go back and watch the tape.

In addition, the purchase-and-sale agreement included an extraordinary indemnity clause on page one of the agreement. The indemnity language gave ALL the liability to the City, and this is very abnormal. In a normal contract, the seller (the owner) would have had the liability for the issue with the building. And of course we have found there are many other issues with the building.

We also know now that the city was paying above the appraised value for the building. So, this was a purchase that was done speedily and in the wrong way and not in the best interest of our taxpayers.

We now know that all the systems in the building were failing. So, if that hadn't happened, something else was going to fail that we hadn't expected.

We were also locked into this complicated lease-purchase, where we we're paying more than we needed to than if we had been able to go direct to the owner of the building and buy it at a lower price and finance it at a much lower interest rate.

‍
Bry also went after Gloria for voting in favor of the controversial SB 145. The controversial bill now gives judges the discretion over sex-offender registration in cases involving teenagers between the ages of 14 and 17, and adults who are no more than 10 years older than the teenager.

Opponents say the legislation (SB 145) is an effort to “normalize pedophilia.”

Current California law automatically adds adults to the state’s sex offender registry if they have sexual relations with minors.

Do you think the criticism against Mr. Gloria's vote on SB 145 is fair?

This is another area in which Mr. Gloria and I disagree.

I agree with Assemblymember Lorena Gonzalez Fletcher and with Mayor Kevin Faulconer. I am opposed to SB145. I am a mom and now I'm a grandma and there's NO case in which there is consensual sex between a 14-year-old and a 24-year-old – whether it's a girl, boy, gay sex, straight sex. It is NOT consensual.

Bry also agreed to a mayoral debate against Gloria, moderated and broadcasted by KUSI News. KUSI News has not yet heard back from Gloria’s campaign.