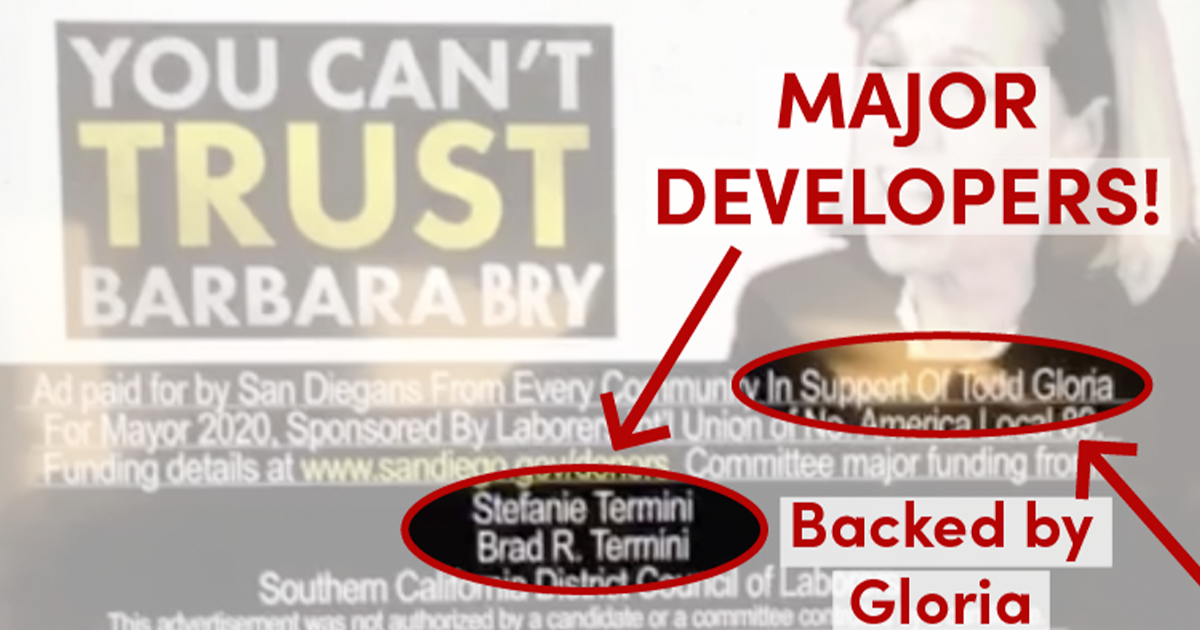 Supporters of Todd Gloria’s mayoral campaign raised the bar on hypocrisy and exposed their cynical strategy to keep Barbara Bry out of the mayoral run-off in a new television commercial they began broadcasting this morning.

The 30-second ad was funded by “San Diegans from Every Community in Support of Todd Gloria and Opposed to Barbara Bry.” It attacks Bry for receiving contributions from developers, despite the fact that out of over 2,500 individual contributions – all complying with the city’s strict personal contribution limits for mayoral campaigns – a tiny fraction came from individuals with any association to the development industry.

The funders of the pro-Gloria – anti-Bry committee include public employee unions (including over $100,000) and affiliates of Laborers International Union ($125,000).  But the most ironic contributions – given the claims in the ad -- are Brad and Stefanie Termini, developers of the controversial Marisol development in Del Mar and business partners of one of downtown San Diego’s largest developers, who contributed $100,000.

This financing scheme continues a pattern of money laundering by Gloria and his supporters that has included a bogus Gloria for Assembly 2020 committee used to funnel over $300,000 of PAC and corporate contributions from Gloria’s previous Assembly campaigns, and over $100,000 funneled through the San Diego County Democratic Party into Gloria’s mayoral campaign committee.

Beyond the hypocrisy of the ad, it reveals an underlying strategy of the Gloria campaign.  Recent publicly-released polls show Gloria leading the race, with Bry and late entry Scott Sherman locked in a battle for the second run-off position.  “The fact that Gloria’s supporters are investing hundreds of thousands of dollars in a deceptive commercial to discredit Bry exposes the fact that Gloria hopes to boost Sherman into second place because Gloria is confident he can defeat Sherman in a November run-off, but knows Bry would be a far more formidable opponent,” said Tom Shepard, a consultant working for Bry’s campaign.  “Those responsible for this ad should be ashamed of themselves for their cynical attempt to mislead voters,” he said.