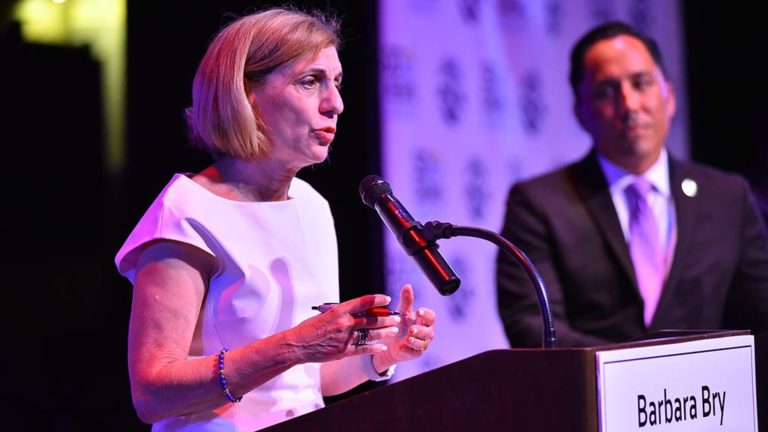 Two candidates in a citywide race, both Democrats, are tied in the polls with two weeks to go. Candidate A is a woman with decades of business success as an executive and an entrepreneur. Candidate B is a man who has spent his whole career in politics.

The metropolitan daily endorses one of the candidates (who once was the frontrunner) to serve as a symbolic figure. Then it blithely suggests the other candidate has strong leadership skills that would be useful in a chief of staff.

Which candidate got the endorsement? If you don’t already know the answer, gender will give it away.

No one was surprised that the San Diego Union-Tribune endorsed State Assemblymember Todd Gloria for mayor. He is the mainstream candidate. San Diego’s old boy network has lined up behind him and invested millions in his campaign.

The U-T’s editorial board has the right to endorse whomever it chooses. But it’s tone-deaf disregard for City Councilmember Barbara Bry, Gloria’s opponent, has infuriated women across the city and across the political spectrum.

Wrinkling its collective nose at Bry’s “harder-edged style,” the editorial board offered this suggestion:

“Bry might well be a tougher manager who is better at making City Hall more transparent and accountable — perhaps a Mayor Gloria could use a chief of staff like her.”

Say what? Let’s break that down a bit.

When is the last time a newspaper editorial referred disparagingly to a man’s “harder-edged style”? In men, that is considered a sign of strength. In women, it is, well…unattractive.

“Making City Hall more transparent and accountable” is the single biggest hurdle the next mayor will face, because it has been the root cause of so many scandals, starting with the 101 Ash Street debacle. The U-T rightly held Gloria responsible for that train wreck then quickly backtracked, saying “[His] actions on 101 Ash St. don’t negate the case for him.”

As for cleaning up the mess at City Hall, anyone who thinks the mayor can delegate that job to a chief of staff knows nothing of the toxic culture of backroom deals and pay-to-play politics.

But the most troubling message in the Gloria endorsement is the outdated idea that women should agree to tackle an organization’s worst problems while relegated to subordinate status.

Women in the workforce have struggled with such gender inequity forever. Bry has achieved extraordinary success in spite of it. Her ability to challenge the status quo helped her rise to the top of the male-dominated tech industry. It’s the reason she is giving the establishment candidate the fight of his life.

There is one other serious problem with the U-T’s Gloria endorsement, and it quickly came to the attention of his former constituents in City Council District 3.

The U-T raised the issue of density and community plans, which have been subjects of controversy. Gloria became surprisingly unpopular in his own district not for his specific stands on density but for for his duplicity and authoritarian approach.

Time and again, Gloria assured his constituents he would hold the line on the kind of massive development that makes neighborhoods unlivable. Then he repeatedly flip-flopped, supporting inappropriate development and scuttling consensus plans.

To cite one example, Mission Hills residents gained support over seven years for a 50-foot height limit in their small commercial area. In the last week of the process, Gloria abruptly supported 100-foot zoning, double what was viewed as acceptable.

After the betrayal, residents of his district referred to him as arrogant, insensitive, and dictatorial. They still feel that way.

That’s why more than 100 (and counting) local residents and small business owners have joined together to form “District 3 for Barbara Bry,” or “D3 for Bry,” and send a clear message to the rest of the city.

We know from direct experience that Todd Gloria doesn’t have the inner steel to make difficult decisions and keep special interests at bay. He is not up to the job that faces the next mayor of taming a budget crisis and making City Hall work for the people.

Barbara Bry has proven over a diverse and exemplary career that she gets results. She is analytical, determined, and principled. And yes, she can be very tough. That’s why we need her, and that’s why we support her.