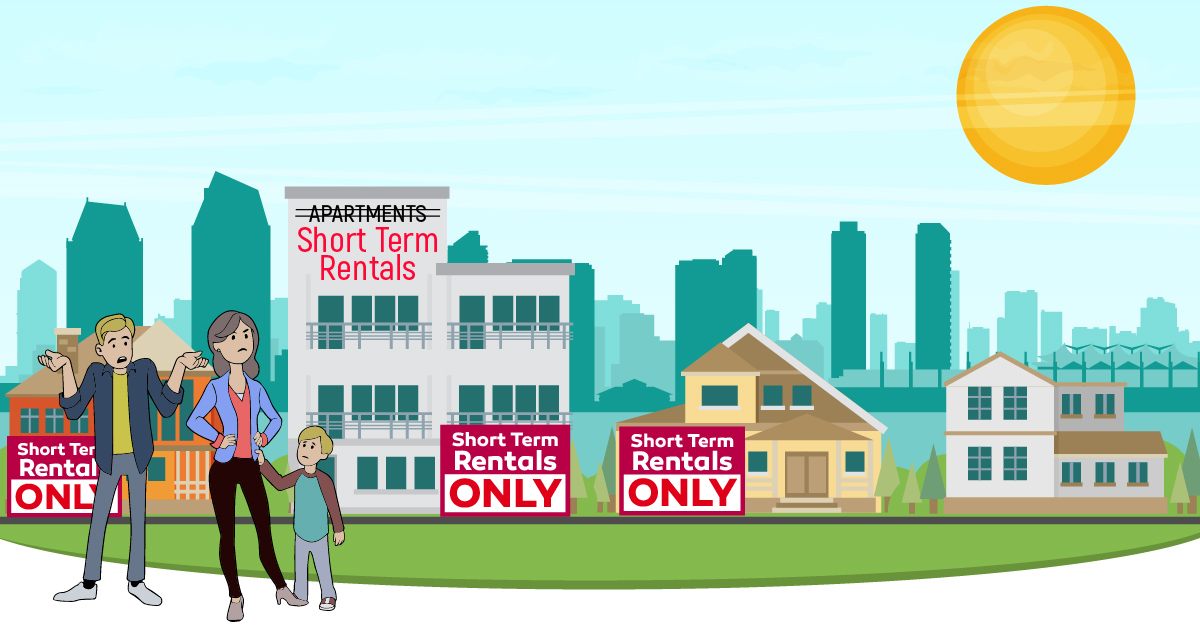 This is in addition to the 16,000 single-family homes in San Diego that our City Auditor estimates are currently being used as short-term vacation rentals.  So here we are significantly reducing our housing stock and artificially inflating rents for permanent residents in the midst of a historic housing crisis.

Our City Attorney has declared short-term vacation rentals in residential zones illegal according to a memo dated March 15, 2017.

It is time to enforce those laws.

On a recent day on the Sonder.com website, a two-bedroom apartment at The Millennium in Mission Valley was listed for $395 per night for the first weekend in August.  At the Louisiana in North Park, three apartments were listed between $208 and $274.  Sonder’s competitors include Domio, Stay Alfred and Barsala.

According to Techcrunch, the company Sonder.com has raised over $400 million in funding with a valuation of over $1 billion. They have thousands of units available all over North America and Europe. The investors aim to be the next Hilton of such rentals.

These new mega-versions of short-term vacation rentals can more easily avoid notice, governance and regulations while operating outside existing law. They are also cheaper than comparable hotel rooms.   They take over space in existing condos and apartments where it can be more difficult to identify than in a single-family home.

These buildings have received permits to operate as living units for long-term residents, not as hotel rooms for tourists.

How widespread is this?  We don’t know.

Let’s put this in perspective.

In 2018, the city of San Diego issued just under 10,000 building permits for new housing units.

Housing experts say if we build more units, prices will come down or at least stabilize.  But turning many more multi-family units into short-term rentals at premium prices may artificially inflate prices on all other units.  In addition, our lack of enforcement means that investors will continue to snap up both single-family homes and condominiums and turn them into mini-hotels. So we are simply playing a game of whack-a-mole.

We have tried to be reasonable.  Last year, I led the effort to have the City Council pass legislation allowing unlimited home sharing in a primary residence and permitting residents to rent out their primary residence up to 180 days a year on a short-term basis (less than 30 days at a time).  It wasn’t enough for Airbnb and other vacation rental platforms.  They paid a fortune and made misleading claims to collect referendum signatures, and we were forced to rescind our ordinance.

To be clear, I am not attacking home sharing—the ability to rent out a room in your primary residence if you are on-site to supervise.

At a time that we have a housing crisis, more and more precious units are becoming short-term vacation rentals.  This unfortunate trend will continue until we act.

It’s all part of the corporate funded YIMBY agenda in which we lose control of our own neighborhoods to large international corporate interests.  Rents will soar. Our infrastructure will be overwhelmed.  And the quality of life in every San Diego neighborhood will be degraded.

I urge the Mayor and the City Attorney to enforce the law.  Now.