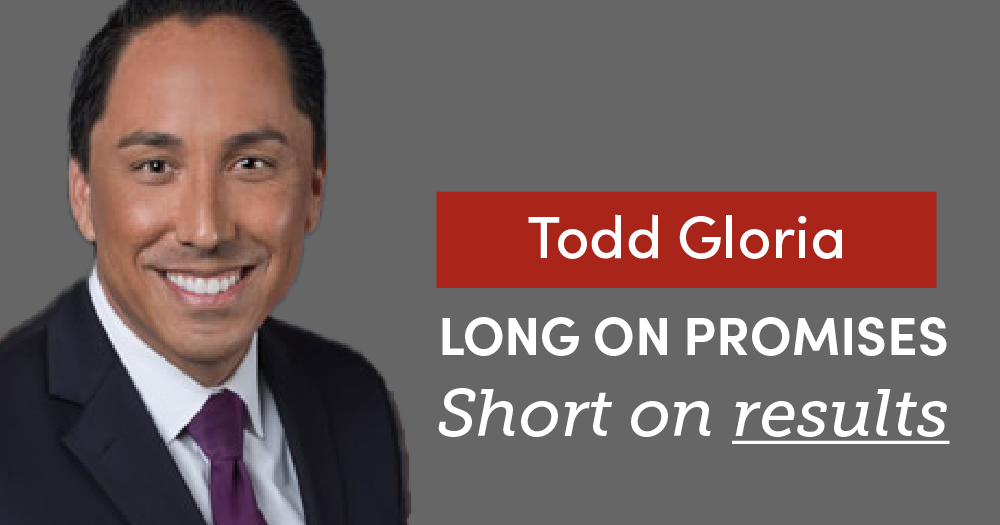 Empty Promise for a Positive Campaign

Todd Gloria has said, several times, that he was running a positive campaign.

“You never saw me in this campaign tearing down my opponents, and voters have rewarded us for that positive campaign.” Gloria said.

Now, we all know that is not true.

He's sending out deceitful mailers to Republicans while running ads comparing me to Trump to Democrats. These are not the actions of a credible leader for San Diego!

He and his special interest supporters are running ads online, on TV, and in email to attack my character. That won’t stop me from telling the truth.

Let’s hope the voters can see through this empty promise.

In 2012, Todd Gloria kicked off his second term as a San Diego City Councilmember telling voters he would make good on his campaign promise to “end homelessness downtown in 4 years.” - Citation‍

In 2019, Todd Gloria admitted that the homelnessness problem was only getting worse, in asking for $500 million more in state funding. - Citation

Now, in 2020, Todd Gloria is once again promising to end homelessness. - Citation

Throwing more money at failed solutions is no solution at all.

Those are political approaches that make for good headlines.

Homelessness must be treated by addressing the root causes. Heroes like Father Joe understand this.

That’s a problem solver’s approach that makes for good policy.

And that’s why Father Joe has endorsed Barbara Bry.

I’ve dedicated my life to helping our neighbors that are homeless put their lives together.

Then, Todd Gloria came along and suggested an approach without shelter, without care, and without rehab.

Because Todd trusted the lobbyists instead of the experts, we ended up with a real problem on our streets.

So I ask you, don’t use your vote for Todd. Use it for Barbara.

San Diego Hero and Advocate for Homeless Residents and Families

In 2016, then-Councilmember Todd Gloria made the motion to approve the lease/purchase of the 101 Ash Street office building saying the building was in "excellent condition" and a "great deal for taxpayers."

It’s not clear whether this transaction was a result of incompetence, fraud, or both, but the language on the first page of that lease/purchase agreement that protects the sellers - but not taxpayers - from future liability should have set off alarm bells for every City official involved with this deal.

According to a recent NBC7 investigative report this one-sided transaction has cost San Diego taxpayers approximately $58 million for a building that’s been vacant for almost four years.

Empty Promises on the Eviction Moratorium

The governor imposed a moratorium that prohibits evictions for six months. Gloria supported it without any solution to the massive problem these empty promises create.

So, what happens when the moratorium is over?

Renters will be stuck with massive debt to their landlords. A flood of evictions and foreclosures will ensue.

I supported the City's rent relief program at the beginning of the pandemic, but it can only provide a tiny fraction of the funds necessary to help those in need, meaning thousands of renters will be left holding the bag.

It’s time to be honest.

The City doesn’t even have the money to pay existing obligations. The only way to protect renters today from massive debt tomorrow is for the state to use its resources to provide rent relief funding now!  Sign the petition to tell the governor and state legislators to back up their “promises” with real solutions.

What were Gloria’s results?

As the Voice of San Diego put it, "[a]s the organization scrambled to meet expectations, management turnover disrupted it, political leaders mismanaged it, costly vendors failed to deliver and now little time remains to put on an event of lasting significance.

A KPBS put it, "[the Balboa Centennial Committee] spent $2.6 million in taxpayer funds with little to show but a stack of bills from consultants," and, "[t]he committee spent too much time outsourcing a “vision,” they said, and not enough time building a coalition among those who could actually make the event happen."

Just another example of the costly consequences of leading by empty promises.

The message was clear: important decisions should be made when the most people participate. That is in the general election when the public and media are paying attention… and voter turnout is often TWICE as high than in most primary elections.

My opponent claimed to support Measure L in 2016.

But just a few years later, he asked the City Council to put an important ballot measure on the March primary ballot.

I’m not picking on my opponent. It’s hard for politicians to uphold their campaign promises when the political game gets in the way.

But I’m not in this to build a political career, so I’m not playing that game.

That’s why I won’t tell voters one thing, and do another. Especially when it comes to the right to vote.